Memoir '44 Projects of eBob Miniatures
Default title (double click to modify)
Do you really want to delete this project?

Default text (click on the pen icon to edit)

Zone of Control Rule:
Rule: Any unit moving into a hex which is adjacent to an enemy unit must stop and engage the enemy unit in close combat.
Units may not simply stroll past enemy units.

As the rules stand, there's nothing to prevent an enemy unit simply driving through your units to get behind - which is often done to trap units and prevent retreat.  This is just a trick used by players to gain more kills - it's not realistic and it's a bit silly. 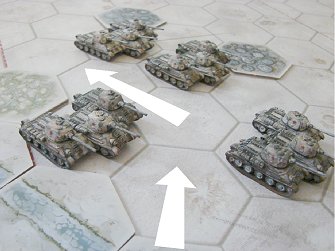 In reality the moment a unit comes within close combat range ie. an adjacent hex to an enemy unit, it would be engaged.

Exceptions to the rule:
The exceptions to the above rule would be snipers who would not project a zone of control around themselves, and supply vehicles which are not fighting units.

Disengaging from a close combat :
Disengaging from a close combat (moving away) will result in the enemy rolling 1 dice against you (in much the same way as a stiff upper lip). An advance made when taking ground or an armour overrun move is not considered to be disengaging.
A unit may move from one adjacent hex or 'zone of control' to another, however it must again stop, ending it's movement.  This move is also considered to be disengaging from the battle so results in a single dice being rolled against the unit moving in this way.  The exception to this rule is an advance when taking ground or performing an armour overrun.

House Rules - Patrol Vehicle (Jeep)
I don't understand why jeeps or 'patrol vehicles' have been given 4 movement and the armour defense that matches a tiger tank!  absolutely crazy, so,

Here are my house rules for jeeps/patrol vehicles. 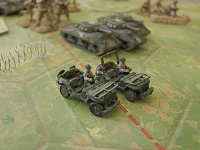 Unit is mobile infantry. However because the unit is small covert in nature only Grenades count as hits.
Unit may move up to 3 hexes. Unit may attack only when in close combat - using 2 dice.  Unit always uses 2 dice in attack regardless of terrain defense.

After a close combat the unit MUST retreat 2 hexes. This is true weather the unit attacked an enemy or was itself attacked. If flags are rolled against the unit it adds those to the 2 hexes that must already retreat. So 1 flag rolled means it must retreat 3 hexes.
Unit may not remove wire.
May not move onto a bunker hex.

In it's roll as a recon unit player may place an Artillery crosshair marker on any unit within 3 hexes and in Line of Sight of the Recon unit.  Only 1 such marker may be employed at any time.  The artillery marker gives artillery an additional dice when firing on the hex.  If the enemy unit moves, the artillery marker is removed.

House Rules - Half track
Why would Half tracks be able to convert themselves into tanks or cavalry?? absolutely ridiclous! and besides this simply mimicks the supply truck rule.

Here are my rules for Half tracks.

Unit starts with 3 models. When unit is destroyed you get a medal.

Unit may not use behind enemy lines card.
May not move onto tank trap and may not remove wire.

A full strength unit gains and additional attack dice when in close combat with infantry.


Half tracks count as special force infantry units - that is they move 1-2 hexes and still battle.
Unit defends as an armoured unit - tanks and grenades count as hits.
House Rules - Tank Destroyers
The official Memoir Tank Destroyer rules imply that Tank Destroyers are slower moving than tanks.  This is simply not the case. While it's true that some of the Heavy German Tank Desroyers were slow, this is only because some were large and built on Tiger and Tiger II chasis - by this rationale the Tiger tank units should also move more slowly - yet they do not.
Actually most Tank Destroyers were built on standard tank chasis and many were lighter and faster.  The US Hellcat for example was possibly the fastest tracked vehicle of the war.  Similarly the M10 and Russian SU vehicles were built on standard tank chasis.


House Rules - Tiger Tanks
Tiger tanks were heavy, slow vehicles. They also boasted the huge German 88mm main gun which was extremely accurate and had easily the longest range of any tank on the battlefield.

Tiger II (King Tiger)
Relatively few King Tigers saw battle, but when they did they were the largest combat tank of WW2.
Move: 2 hexes
Fire: 3,3,3,2
Defense: 2 hits followed by 2 grenades must be rolled in a single attack to confirm a kill.

House Rules - Mobile Artillery
Mobile Artillery includes:  British Bishop, German Stug and Russian SU122.  These vehciles are based on standard tank chasis and so have similar attributes in terms of speed and armour. They can also fire a limited number of ant-tank shells in self-defense so are not completely impotent against enemy armour.

Mobile Artillery
Unit comprises 2 models
Move rate: 3 hexes = unit may move or fire - but may also move 1 hex and still fire.
Unit may not make use of the Artillery card.
Defense is the same at a tank unit - tanks and grenades count as hits.
Fire: 3,2,2,1,1  (slightly shorter range than standard artillery).
As with artillery shots ignore terrain defense.

Improving the look of your T-34s.
The tank models in Memoir '44 are at first glance rather disappointing.  The poor level of research and moulding on them rather lets them down which is a shame.  And then there's the problem that doing extensive work on them will take forever because there as so many to do - which is the other problem that you can't easily afford to replace them either.  However, the worst aspect of the T-34 model in the gun barrel.  They are short, fat, droopy and unconvincing.  Assuming these are supposed to represent the later model T-34/85 they should have a nice long straight main gun.  This can be done very easy, rapidly and cheaply and the effect is to improve the look of the tanks 100%.

Remove the gun barrel with scalpel.  Then with an appropriate size drill - drill a hole where the barrel was - I did this using a simple hand drill or 'pin vice'.  Then take a large size paper clip and using wire cutters or the cutting blades on some pliers, cut a length off the end about 20mm or so and super glue into the front of the turret and your done!   just be sure to have the nice flat end from the paper clip showing and not the cut end which won't look so good.

Paint your tanks using Humbrol Spray acrylic - medium green.
I painted extra details - but you don't have to.

Vehicle Decals
The Decals I used on my Sherman tanks were from eBay seller Mehusla.
http://myworld.ebay.co.uk/mehusla/?_trksid=p4340.l2559 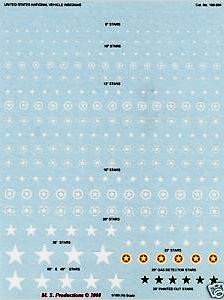 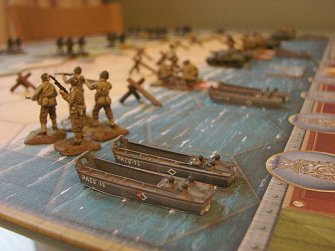 The landing craft illustrated here are the small US infantry LCVP or Higgins boat.  Check the size of any others as the vehicles ones like the LCM may be too large to fit on the hexes.

Additional rules:
I have also placed some tank trap models along the shoreline.  In reality there were obstacles not only designed to defeat tanks landing but also the landing craft.  In my scenario, landing craft may not advance to a hex that has an obstacle placed.
Engineers may remove the tank obstacles but attacking it with 3 dice and rolling either a grenade or a star.  Engineers must be on the hex and have an attack move available to them.

If a US special unit is lost ie. engineers or Rangers etc - then this unit can be replaced when a landing craft disembarks.
To disembark the landing craft must move forward to the shoreline and the boat models are replaced by an infantry unit.