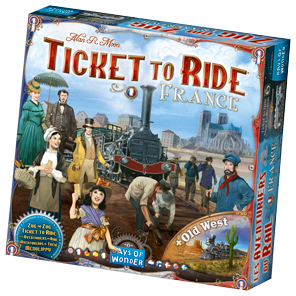 Dive into thriving French culture during Impressionism and the Industrial Revolution; street cafes, "Starry Night", Paris boulevards, and Notre-Dame. The French railroad system is a blank canvas just waiting for your masterful strokes. However, before you can start claiming routes, you'll need to lay the tracks! Watch for your opponents, though, because they might claim the route you just spent so much time building...

This Ticket to Ride© expansion also includes the Old West map where up to 6 players develop their networks starting from their Home Cities. Claim cities along the way or take advantage of the other companies that have done the same. And who knows? Maybe you’ll be able to solve the Roswell Mystery… 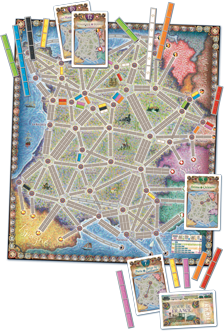 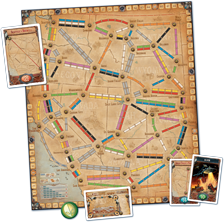 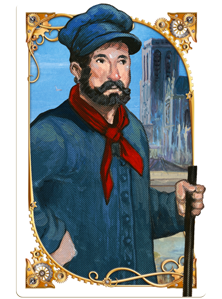 Ticket to Ride France creates a brand new competitive element for Ticket to Ride players. The flow of the game is different from all previous versions and forces the players to rethink old strategies. Every time you draw cards, you must build track (by adding a piece of track to the board). But building track does not assure you will be able to claim that track later. You will have to bluff some of the time by building track you don't really want. In addition, you may want to build track you don't need, forcing your opponents to collect color cards that are in short supply. This will be especially effective if you build lots of track of the same color in an area you know your opponents need and you don't. You will build a lot more track than you will claim in the game, so there will be many opportunities to bluff, mislead, and be clever. In addition, there is always a chance you can claim a route that another player has built, also making it harder for the opponent to finish his network.

A different challenge awaits you on the Old West map, as you can no longer build track anywhere on the board. You must pick a starting city and then expand from that city. You can claim control over other cities in your network during the game. When an opponent builds a route into a city you control, you get the points for the route rather than the opponent. So as you are expanding your network, you must decide whether to give points to your opponents or take a different, "free" route.” Finally, this just in: rumor has it Alvin the Alien has landed in Roswell, NM.