Queen Himiko has tasked every builder in the kingdom with a prestigious mission: build the capital of Yamataï and make it the jewel of the archipelago. Your task: surpass your competitors and build the most prestigious city of them all, using resources from the fleets that travel through the kingdom. Prepare your strategy, recruit specialists, and do whatever is necessary to become the best builder and be rewarded by Queen Himiko for your work. In the end, only one name will be remembered as the greatest builder of Yamataï!

In Yamataï, players compete to earn prestige points using different strategies. Clear the different islands of the archipelago to recruit powerful specialists that will assist you, or use the resources carried by the boats that navigate between them to construct buildings on the islands! And, if you’re skilled enough, try creating prestigious buildings such as high temples or rare torii.

However, you are not alone in competing for Queen Himiko’s favor… will you manage to surpass your opponents? 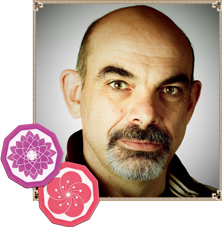 While interested in Arts – he had a penchant for "making pretty things" as a child – he first chose a more traditional career path by studying Mathematics and Physics and then finding job security for 18 years in an R&D department working with tungsten alloys. (Don’t worry, it’s not contagious!)

Passionate about games since childhood, he started designing games as a hobby while still working his "day job". Then in 2004, his company met with major economic difficulties and he suddenly found himself with a lot of free time on his hands. It was time to try his luck at transforming his hobby into a full time profession. It seems to be working out – dozens of his designs have hit the shelves since then and he still has time for freelance consulting/design for various publishing companies. 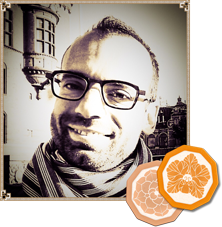 He has always been fond of developing ideas and “inventing”. In Middle School, for instance, he created a perpetual motion machine or “adventure” games for his friends.

It took him some time but he finally aknowledged the fact that perpetual motion is impossible and started studying Mechanics. At the same time, thanks to his friends, he discovers games such as Illuminati or Knightmare Chess.

Today an automotive engineer, he uses game design as a way to unbridle his creativity.

His source of inspiration? A playful spirit and nature walks… 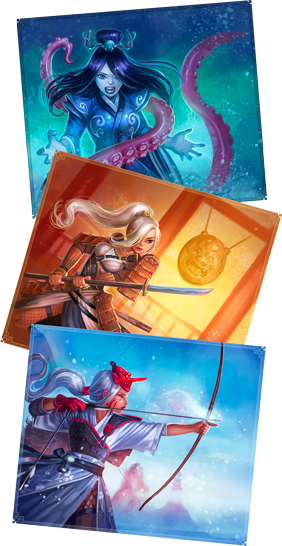 Set in ancient Asia, between Japan and China, Yamatai is beautifully illustrated by Jérémie Fleury (http://www.trefle-rouge.fr/).

The game background is depicted as a rich and spiritual kingdom, where Queen Himiko while being strong and proud is also kind and caring with her loyal subjects.

The colorful art of the game is inviting players in a immersive journey through ancient time, where history and mythology seamlessly blend in a warm atmosphere. 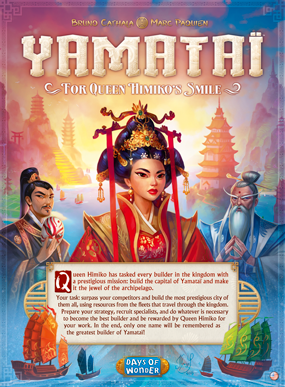